One of the most beautiful techniques employed on publishers' bindings was stamping in bright and matte gold. This could be accomplished with a single impression of a specially engraved die. Microscopic textures were added to parts of the image by various processes. Physical methods would be to engrave a stipple or cross-hatch pattern with a burin, or to roll or press a pattern with a mezzotint rocker or similar tool. A chemical method such as aquatint can also be used to texture the die.
The effect is to make the gold reflect bright and dark in different parts of the image as the light hits it at different angles. This would draw attention to the book in a bookstore window or store display as someone walked past it, and also creates dramatic shifts in light as the book is held and turned at different angles. 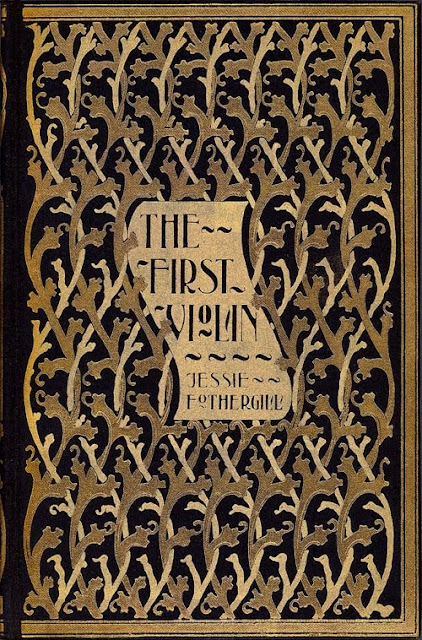 The First Violin by Jessie Fothergill Illustrated by G.W. Brenneman New York: Brentano’s, n.d., ©1896 two volumes 21 x 13.8 [unsigned, Lee and Henry Thayer?] Two-tone gold stamped black cloth with original cloth dust wrappers and slipcase.
Above is a scan. Below is a flash photo, with the light at a different angle. The vines on the front cover that are light above are dark below. The texturing on the back cover is symmetrical with that of the front cover. The curved spine in the photo is not that much darker than the covers, but the covers are flat on to the flash and the reflection of the light in the gold is too much for the camera. 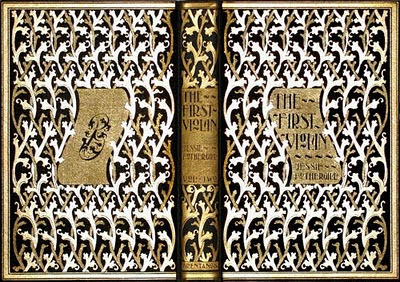 The enlarged scan detail below makes it easier to see the technique. 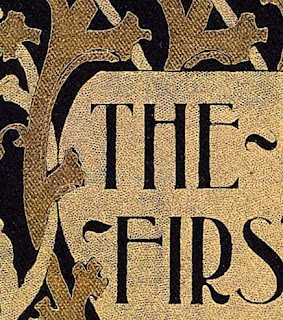 The above design is attributed to Lee Thayer (of The Decorative Designers firm) by John Lehner in TBR #4, March 1992 [Trade Binding Research Newsletter]. Charles Gullans felt that the release date of this design was a few months too early to be a DD production, and the 1840’s derivation of the style indicated late work by an older designer. He suggested (in a letter to John Lehner) that it might be by H. L. Parkhurst, who is known to have designed the signed binding below for this edition. 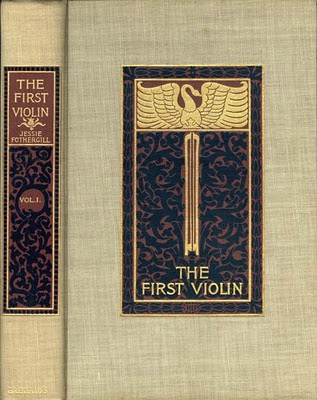 The First Violin
by Jessie Fothergill
Illustrated by G.W. Brenneman
New York: Brentano’s, n.d., ©1896
two volumes 20.9 x 14.1
[signed HLP, H. L. Parkhurst]
Lehner’s points are more compelling. In an e-mail to me, he wrote “The lettering is the best overall example of the early DD work...dingbats, a flamed L, the cross bars pushed to the top, dingbatted o’s, the graceful R, the diagonal part of the N intersecting RHS above the bottom corner. Just wonderful. Not to mention the Lee Thayer repeat design using one of her favorite leaf forms.. a gothicky leaf based on the thistle, used on other works such as Red Cap Tales, and the T Y Crowell reprint of Kenilworth by Scott ca. 1900 and finally, The Strathmore Quality Book Paper sample book where she uses them on the cover, tp, and borders to introduce each type of paper, changing the two colors.” He notes the “trumpet E” in his TBR article.
I agree with Gullans about the 1840’s reference, but the reinterpretation like this of earlier motifs was not uncommon among the younger designers. The repeat design is reminiscent of Will Bradley’s work, as in Lucile (1897). 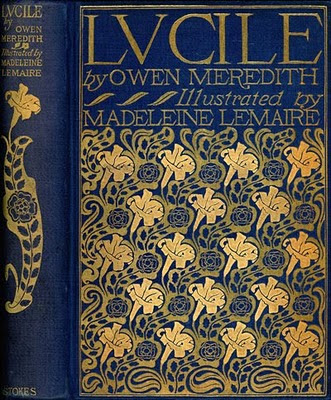 Lucileby Owen Meredith (Edward Robert Bulwer-Lytton)
Illustrated by Madeleine Lemaire and C. McCormick Rogers
New York: Frederick A. Stokes Co., n.d., ©1897
23 x 14.4
[signed B, Will Bradley, Bambace A28]
There is similarity in movement to the vines above on The First Violin in the DD design on The Epic of Hades (1897?), and also a similarity to the Bradley design above. Artists paid attention to what others were doing and freely copied what they liked. This often makes the attribution of unsigned cover art difficult. 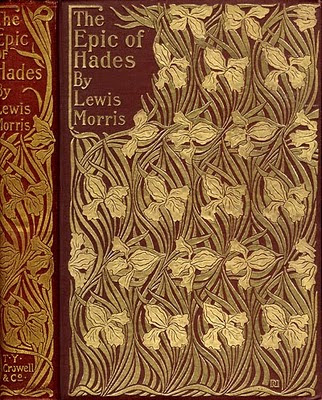 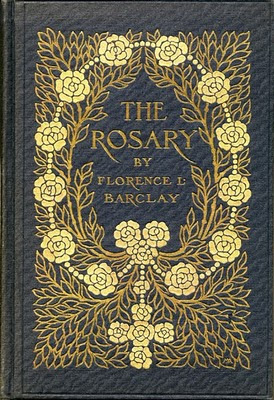 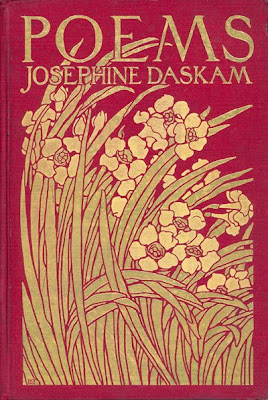