The Fifth Exhibition of American Decorated Publishers' Bindings from the golden age is now up in the gallery, and it includes some scarce and beautiful cover art. One of my favorites is the wraparound Art Nouveau fantasy village on Poems for Travelers. It is in the limp cloth format, stamped in bright and matte gold. 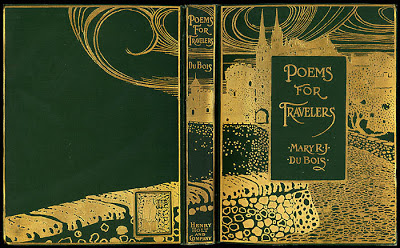 At first it did not appear to have a monogram. Then I noticed a squiggle in a stone in the wall on the back cover.  I sent it to John Lehner to see if it looked familiar. He wrote back, "I am convinced you have found another monogram for Walter King Stone." Of course! Stone was a master at obscuring his initials, and it was a nice twist to disguise it as a stone.


John was the first to decipher the WKS monogram on The Log of the Sun (Holt, 1906). This was in our First Exhibition in 2004, and you may know it from The Art of American Book Covers 1875-1930, which is now out of print in hardcover (none in the publisher's warehouse, though some copies may be available in bookstores or online).  It will be available as a paperback in September. 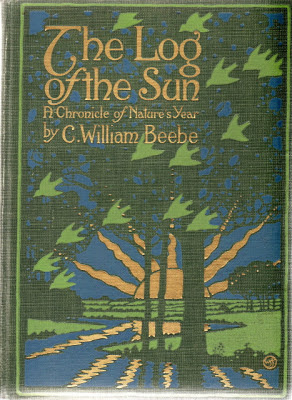