I am pleased to let you know that the entire exhibition of American Trade Bindings with Native American Themes 1875-1933 has been acquired by the Eberly Family Special Collections Library at Pennsylvania State University. This is the same library that acquired the previous exhibition, The Book Cover Art of Thomas Watson Ball.

It's been three months since the previous post—in addition to packing and delivering the books I was finishing my new work, Notes, which is a Featured Artist Exhibition at the Center for Book Arts in New York City through December 20. Also presented two talks and taught a Master Class there.

Now that things are calming down, there is space again in the studio/gallery to open some of the cartons of books purchased from the Mercantile Library five years ago. They kept the covers in miraculous condition. Some volumes are pristine, as though they just came from the bindery. Even books that were read to the point of falling apart were re-sewn and cased into the original covers.

One exciting find was Amy M. Sacker's design on Sweet Peggy by Linnie S. Harris [Little, Brown & Company, 1904]. Like many of their rebound books, the replacement endpapers are acidic, have turned brown and are disintegrating, but this does not affect the cover art. Considering the amount of use this volume must have had, the design remains bright on the cover and spine, with just a few smudges that can be cleaned. 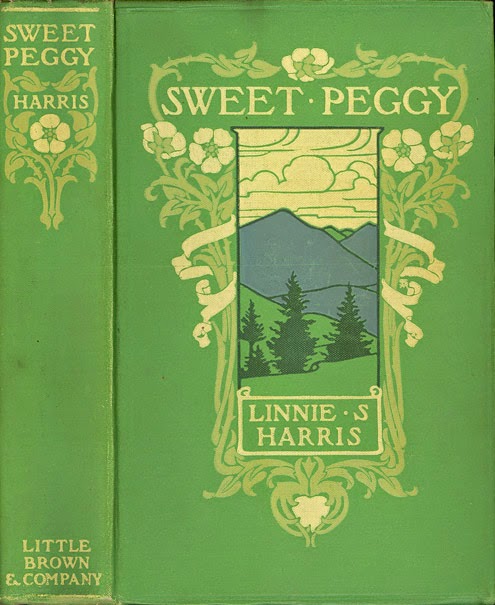 What's exciting about it? It's not just that it's a good cover design by an important artist, and one that adopts Thomas Watson Ball's style of clouds. This is a rare book. WorldCat shows just two copies, one in Special Collections at the University of Washington and one in Rare Books at the Huntington Library in San Marino, CA. Amy Sacker's work has been superbly documented by Mark Schumacher. If you've never clicked the link on the left to his Amy Sacker website, this would be a good time to explore it. Sweet Peggy was not in his list. I wrote to him. He was not familiar with it, so I sent him a photo.  He replied, "This is, for some reason, a very scarce title. Most libraries own a microfilm version of it !!" Mark is a librarian at UNCG, which has a fabulous collection of trade bindings, with over 1,800 in their Digital Collection.

I looked everywhere for another copy to see if I could find one with the original endpapers, and found one! But it has a different cover. Clearly a later printing, it has no date on the title page. Little, Brown used the same AMS spine design. Evidently they didn't want to spend the additional cost of stamping four colors, and used a design with just two. This printing has the same frontispiece, but not the additional illustration opposite page 220. 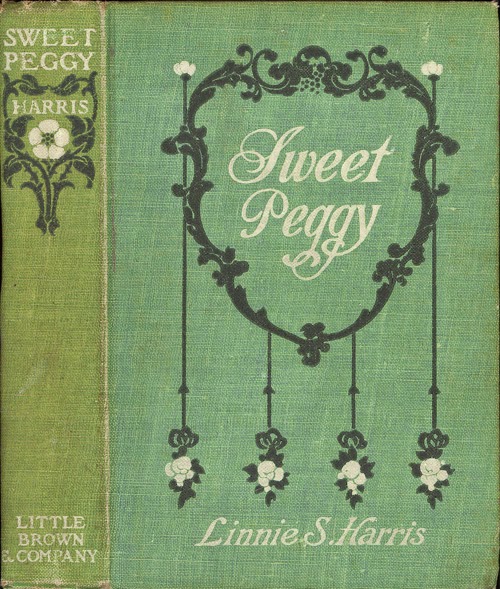 Why is this book so scarce? We know of only three extant copies with the AMS cover (assuming the two others have the original cover in good condition) and just this one copy of a later printing.  What happened to all the others?  Clearly it was a popular book—the Mercantile copy was read so much it needed rebinding, and sales were strong enough to do at least one other printing. 22 libraries have the microfilm of it, and one library, OSU, has a microform of an A. L. Burt reprint, though no physical copies of that edition are listed anywhere.
Posted by M at 5:26 AM 2 comments: