These arrived after the exhibition catalog was printed, so you might want to print this page on acid-free paper and slip it into your copy as an addendum. 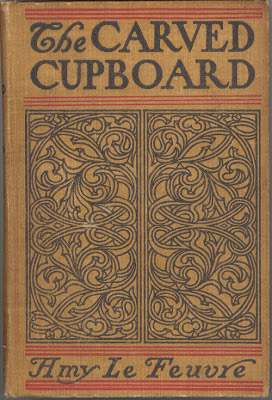 The Carved Cupboard
by Amy Le Feuvre
Dodd, Mead and Company, New York, 1899
[Cover by Thomas Watson Ball?]
There is a question mark at the end of the attribution for the same reason that convention is followed in the catalog--this design is not in the Ball portfolio, is unsigned, and we have not seen a reference to Ball in a publisher's advertisement. This design looks like none of the confirmed Ball covers, so why do we attribute it to him?

First, the lettering style is very much like several Ball covers of this period (see catalog pp. 20-23), and we know he did work for Dodd that year (catalog p. 63). More significantly, though this is the only cover of his we have yet seen that is an intricate work of Gothic design, we know that he was a master of the form from his work as a church decorator (catalog pp. 8, 15). 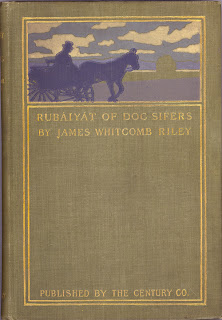 An apparently simple but in fact elaborate production, with stamping in gray, blue gray, light blue, dark purple, off-white and gold. We have no other covers by T. W. Ball from The Century Co., yet this one exhibits so many Ball traits we have to give it a high probability of attribution. The double border panel is on many of his designs, along with the use of a silhouette pictorial (catalog p. 27), the familiar landscape style (catalog. p. 24) and clouds (p. 30), with the overall composition being similar to The Voyage of the Rattletrap (Harper, 1897).