One More River, an Art Deco cover in transparent jacket


Here's a beautiful Art Deco publisher's binding that has an unusual dust jacket and presents many questions. One More River is the final installment of the trilogy "End of the Chapter", which  is the third trilogy of The Forsyte Saga. This is the American edition. 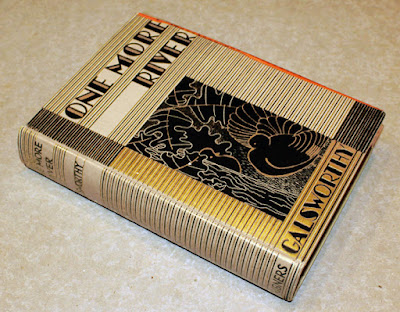 1. This is the first publisher's binding I have had with a clear dust jacket and printed paper flaps. The photo above shows it in the jacket. Many books have come in a glassine jacket, which is not as clear as this, and is more fragile. This feels like a plastic material, and I am advised by several people that it is most likely acetate. A similar style of jacket was used in 1930 by the Lakeside Press, Chicago for the limited edition of Moby Dick with Rockwell Kent illustrations, though that flap was not printed. It has a slightly rippled surface, which you can see when the light is at a certain angle.  The photo below is taken with a flash to get reflections from the texture: 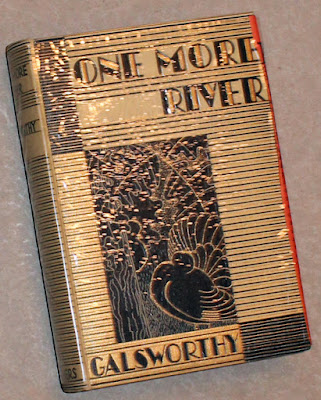 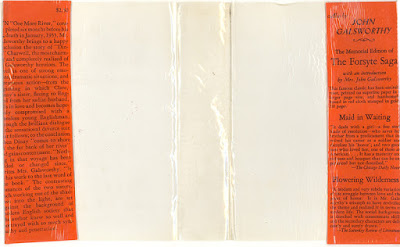 The transparent dust jacket with flaps. The color behind the plastic is the scanner pad.

The attachment of the acetate to the back of the dust jacket flap.

Following an inquiry to the exlibris listserv I received an email from Alan Tannenbaum, indicating that this type of dust jacket was patented in England in 1929 (Pat. GB330781) by Lewis George Kitcat, master bookbinder from the House of Kitcat. In a followup he sent me patent images and text, and an article in The Carrollian | The Lewis Carroll Journal [No. 22, Autumn, 2008] by him and Selwyn Goodacre titled "Macmillan's Ledura Bindings with Transmatic Dust Jackets." The article describes four Carroll books issued in this sort of jacket, and he adds eight British publishers who used this form of jacket between 1925 and 1939.

There is no indication on our Scribner edition that this was licensed from the British patent, and I am now trying to determine whether the British patent secured any American rights, and if this Scribner form of the jacket is identical to the Kitcat patent, or whether the method of attaching the paper flap is different enough that it was not infringement. The patent indicates celluloid as a material, but is careful not to limit it to that.

The dust jacket has preserved the brightness of the gold.  The book was published at the bottom of The Great Depression, and it is not genuine gold.  You wouldn't know that from looking at this copy, but I have another copy where the "Japan gold" (a bronze or brass leaf) has oxidized and darkened.

2. What edition is this? Normally a fancy cover is put on a first printing of a first edition, and plain covers often come later. But this edition does not have a capital A on the copyright page, a convention used by Scribner's on first editions after 1930 until the 1970s. There are dozens of copies of this book available online, identified as "first edition" with the A on the copyright page. Those copies have plain purple covers. In other respects this edition is the same, with 1933 on the title page. The text on the dust jacket flaps is the same, though on orange paper for this edition. Perhaps it was a holiday gift book edition. I'm looking for advertisements with pictures of this cover. If you see one, please let me know.

***UPDATE November 4, 2019: I just acquired another copy in this cover design, and it has the "A" on the copyright page. Apparently both bindings were simultaneously available on the first printing, and also on at least one later printing. That makes it even stranger that this design is scarce. 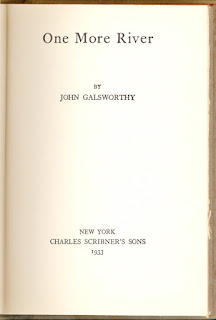 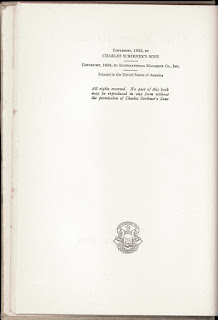 3. There is no monogram or other identification of the cover artist. The Art Deco lettering and decorative elements surround an abstract pictorial that resembles a woodcut. I have not yet identified the artist, though at that time Art Deco woodcut masters Rockwell Kent and Lynd Ward were doing work for Scribner's. Here it is without the plastic dj: 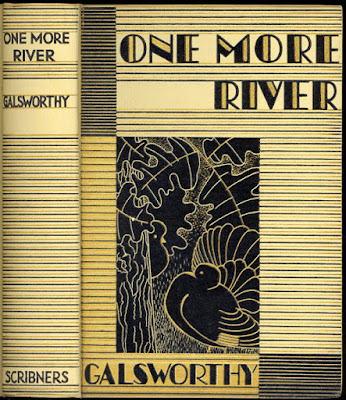 The cover and spine.

If you think the clear plastic dust jacket is a later addition where someone cut the flaps and added them, I learned about it from John Lehner, who has one that is identical. There are very few copies with this design showing on the Internet. 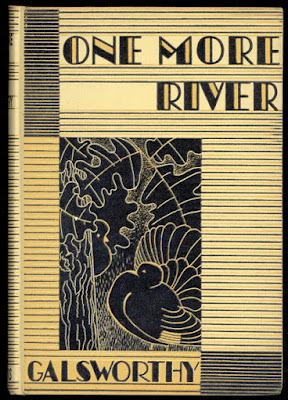 A Dealer has Some Nice Bindings

I just bought a few books from Ron Lieberman of THE FAMILY ALBUM, ABAA. He has posted many in albums that you can view on the Internet.  Even if you are not buying, there are a lot of interesting covers to see, many of which have been in my exhibitions. Here are the links: