In 1970 Charles Gullans and John Espey conducted two interviews with Emma Redington Lee Thayer (1874–1973), co-founder (with Henry Thayer) of Decorative Designers, the New York firm that created thousands of book cover designs. The firm was started about 1895 by Henry, Emma joined him the following year, they married in 1909, were divorced in 1932 and DD closed. In 1919 Lee Thayer, as she then called herself, published her first mystery novel, which was followed by another 60, the last issued in 1966.

The interviews were conducted May 2 and July 21, and mostly provided attributions for which DD artists created various designs, in preparation for a DD exhibition that Gullans and Espey were organizing at UCLA. But near the beginning of the second interview Lee Thayer started talking about "Robert Ball," whom she recalled being at Harper's for a short time beginning in the mid-1890s. Gullans corrected her that it was Thomas Watson Ball, and referred to the Ball portfolio of 41 designs that had recently sold at the Swann Gallery in New York (see the May 24 2010 post for more on the portfolio).

Lee credited Ball with the sudden change in quality of cover designs at Harper, and identified a few of the Harper covers that Gullans had thought might be unsigned DD designs as Ball's work. Ball worked as an "Art Editor" (now that might be called "Art Director") for Harper from 1894-1900.

One  was The Booming of Acre Hill by John Kendrick Bangs (1900). The creative use of paneling for the tails of the lower case g is very Ballesque, and the letterform of the g is similar to that on other Ball designs, such as Light Freights. What is particularly useful about this attribution is that there is a landscape line drawing at the bottom of the cover, which helps stylistically in the identification of other unsigned covers we think might be by TWB. 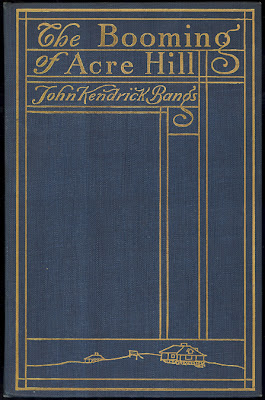 Another is Abner Daniel by Will N. Harben. Thayer said "I'll betcha that's Robert Ball's." She kept calling him Robert, even after Gullans had corrected her.  It was published in 1902, and though Ball ended his employment at Harper in 1900, he may have continued to do freelance work for them. The lettering does have similarity to other Balls, and panelization was a characteristic of his work, though others copied that style. 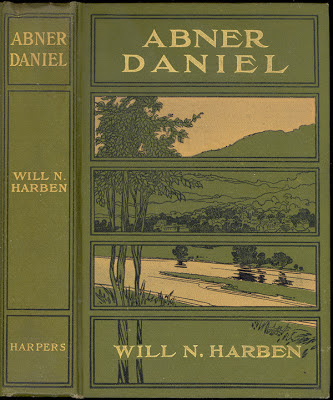 Although she kept calling him "Robert," Lee Thayer may have known Thomas Watson Ball quite well. I had noticed that many DD designs were so much like Ball's that if they had not had the DD logo they might be attributed to TWB. It seemed likely that he would have worked with Henry and Emma for several years in his role at Harper's, perhaps sketching designs for them to execute. And when Ball was freelancing, he might have done some work for DD, who had enormous output at that time.

A breakthrough came via one sentence in Ball's previously unpublished memoir, which was sent to me by his granddaughter while the exhibition catalog was in preparation. In describing the Greenwich Village neighborhood where he lived as a young man, he mentions a house on the corner of Bleecker Street, writes about the family who lived there and his interactions with them about 1890 (a time when the country went into an economic recession). He continues,

"At that time, owing to a greatly diminished income, the Cairns were compelled to rent some of the rooms in their large house. Their first paying guest was an elderly Scotch clergyman and his daughter. They also had a Miss Lee, a Southern girl who afterwards married Henry W. Thayer, a well known designer who I knew intimately when I was an art editor with the Harpers."

Emma Lee was not actually a "Southern girl." She was born in Pennsylvania. Her parents, Edgar and Jane (Pomeroy) Lee were from Birmingham, Alabama, where their first three children were born, but they moved to Bradford, PA before Emma's birth (genealogy). In New York City she studied art at Cooper Union and Pratt Institute.
Posted by M at 8:05 AM 1 comment: