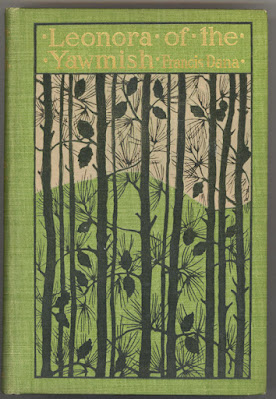 Thomas Watson Ball?
Francis Dana
Leonora of the Yawmish
New York: Harper & Brothers, 1897
This unsigned cover was issued by Harper while Thomas Watson Ball was working there as an art editor, what today would be called an art director. Although thin trees are a common element in his designs, along with a background hill, I hesitated to give an attribution. Many designs from Harper during his tenure there (1894-1900) look like he may have sketched them for others to execute, either staff artists or outsiders. We know The Mistress of the Ranch was Ball's design the same year, because that is in his portfolio, which is at the University of Rochester Library. It's the "Rosetta Stone" for TWB designs, and you can see every cover in it. 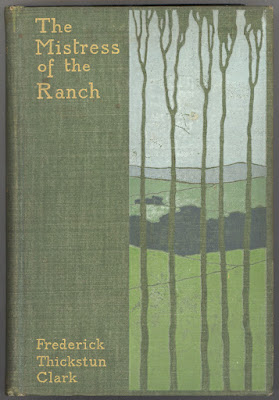 Thomas Watson Ball
Frederick Thickstun Clark
The Mistress of the Ranch
New York: Harper & Brothers, 1897
Ball generally did not use dots between words in a title, but he did so many variations of lettering that it doesn't mean it's not his. The style of lettering is similar on both of the above covers. The stylized pine cones and needles are a feature I hadn't seen on other TWB covers, but have seen on Lee Thayer's designs. Lee and Henry Thayer, the Decorative Deisgners firm, did many covers for Harper while Ball was there. That got me looking  through my catalogs  for designs with pine cones and needles. The first one I found was in the Second Exhibition, 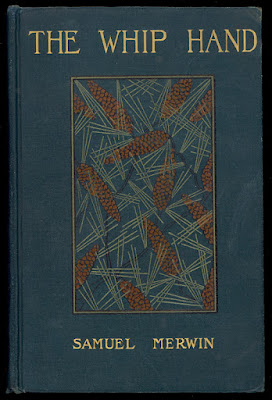 Thomas Watson Ball?
Samuel Merwin
The Whip Hand
Ills. by F. R. Gruger
New York: Doubleday, Page & Company, 1903
When I wrote the catalog description for The Whip Hand in 2009 this unsigned design reminded me of a Decorative Designers cover, perhaps by Lee Thayer. Today I wonder if this is another Ball, done the year that he was hired by Colgate as their art director. The lettering does have a TWB look to it.
The Second Exhibition also had The Pine Grove House, an unsigned cover attributed to Lee Thayer [TBR #8 p. 13]. Here are two cover variants that internally appear to be on the same edition. 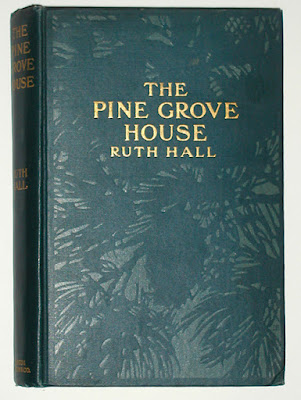 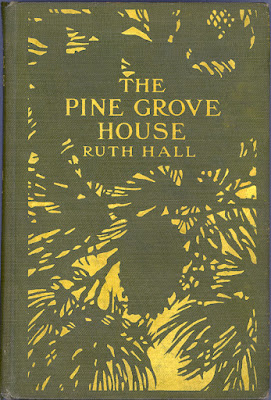 Lee Thayer
Ruth Hall
The Pine Grove House
Boston and New York: Houghton, Mifflin and Company, 1903
Although it's not pine cones and needles, a similar effect was created by Frank Hazenplug for his cover on San Isidro, done three years earlier, which was in the First Exhibition. 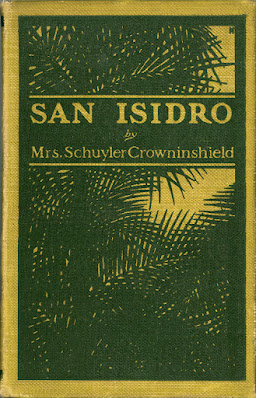 An entirely different style was used by Will Jordan, from the Second Exhibition: 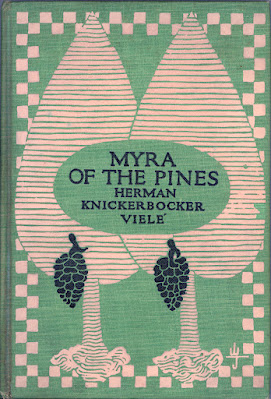 In 1903 Thomas Watson Ball was hired as the Art Director for Colgate (until 1907), and his book cover lettering style follows the Art Nouveau logo he developed for their toothpaste. He used similar lettering for Robin Brilliant and Handicapped Among the Free, also incorporating Art Nouveau elements in the designs. 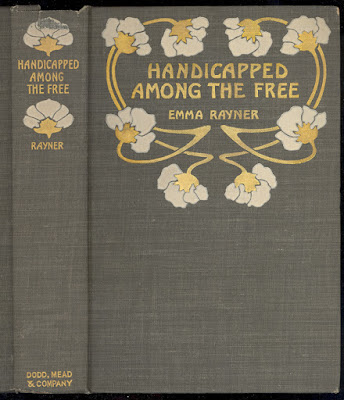 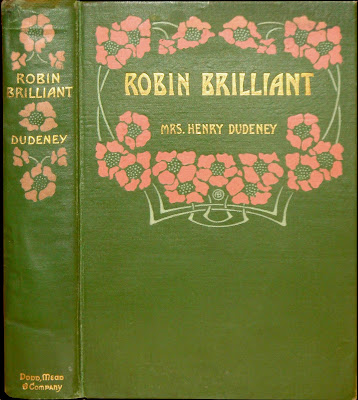