Spun-Yarn, and a "new" Margaret Armstrong

Thomas Watson Ball was an art director at Harper's when this edition of Spun-Yarn was issued. He did use seahorses as a spine element a few years later on Light Freights, and there are some similarities with Ball's lettering styles, but there is not yet enough evidence to give this design a firm attribution. If you have seen any similar designs, please do comment. 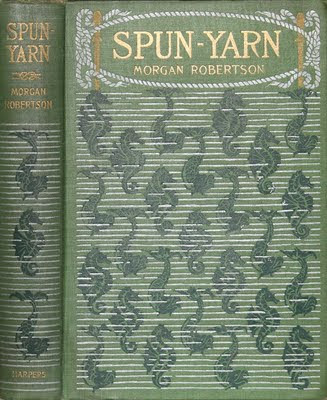 [unknown artist]
Spun-Yarn
by Morgan Robertson
Harper, 1898
The use of horizontal lines for water was not in itself new. For example, Margaret Armstrong used blue lines for Scribner's 1895 edition of Henry Van Dyke's Little Rivers. 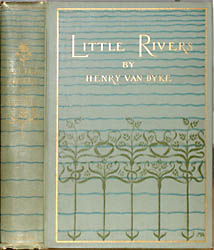 Margaret Armstrong
[signed with MA monogram]
Little Rivers
by Henry Van Dyke
Scribner's, 1895
Armstrong had previously done work for Harper's, but they did not allow her to use her monogram. Below is an example that is not in G&E *. It is clearly her work, both the lettering style and the design in gold and "silver" (white metal). Thanks to John Lehner for pointing it out: 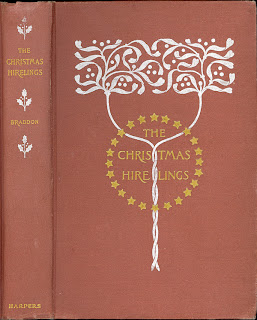 The binding on Ziska is mis-described in the Stone bibliography* as "dark green patterned cloth," as though it was off-the-shelf material. It actually is signed Ethel Belle Appel cover art, in Art Nouveau/Egyptian Revival style, with her vertical EBA monogram  on the front cover.
If you missed the previous post with EBA covers, click here.
*    Kramer,  Sidney.  A History of Stone & Kimball and Herbert S. Stone & Co. with a Bibliography of Their Publications 1893-1905. The University of Chicago Press, 1940. [No. 103]. 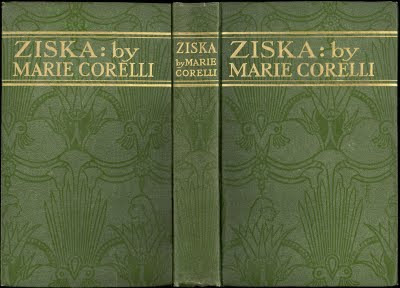 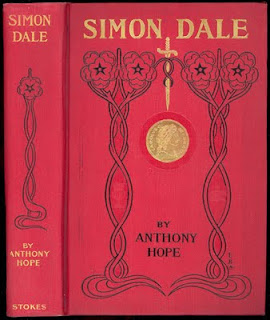 Ethel Belle Appel
Simon Dale
by Anthony Hope
Frederick A. Stokes Company, n.d. ©1897
Below: the dust jacket repeats the design without the sword and medallion. 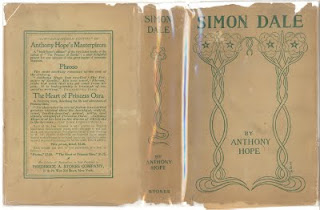 Lovers of American publishers' bindings might want to look at the Barnes & Noble 2012 Desk Diary. They asked me to write an introduction and provide images for every month and every week. The diaries are not yet in the stores, but if you go to the BN website by clicking all three versions linked below, and when you get there, click where it says "more" under the photo in the left column, each has photos of several different pages in the diary.