One of the stranger American literary figures was Herman Scheffauer (1878-1927), the San Francisco poet and protégé of Ambrose Bierce who moved to Germany and became a propagandist during WWI, was indicted in abstentia for treason by a Federal Grand Jury in 1919, and committed suicide eight years later, jumping out the window after murdering a woman in his apartment.

He is of interest to us because, according to a query response from  Thomas A Goldwasser Rare Books, Scheffauer is the HS of the monogram on the Shapes of Clay cover. That information led me to acquire a copy of Scheffauer's The Masque of the Elements (London: Dent; NY: Dutton, 1912). Although unsigned, it has so many elements in common with the Shapes of Clay cover art that it appears to be the same hand, refined by a decade. 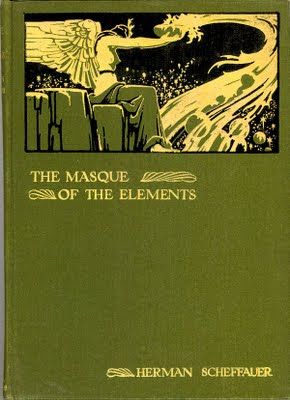